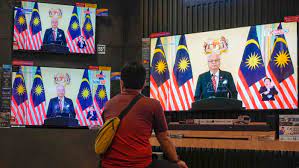 The Malaysian Prime Minister, Ismail Sabri, has just announced the dissolution of the country’s parliament, paving the way for the country’s 15th General Election. The move was much anticipated following weeks of speculation. In his address to the nation, the Prime Minister mentioned that the “people’s mandate is a powerful antidote for the country to manifest political stability and create a strong, stable and respected government after the general election.”

The election hopes to put an end to a difficult 4 years for the country. Malaysia saw power changing hands three times since the groundbreaking election in 2018 that ended the long-standing rule of Barisan Nasional. The smooth power transition however did not translate to a smooth administration. Having three Prime Ministers in four years is something that Malaysians never experience since the country gained independence in 1957.

The election comes at a time when the economy is still struggling to recover from both external and internal economic shocks. The Covid-19 pandemic and the sharp economic downturn in the last two years saw Malaysia’s GDP crawling, with economic growth a pale shadow of past trends. The war in Ukraine and the concomitant sharp rise in prices are putting any firm recovery on hold. A serious issue is that the economy suffers from a lack of policy consistency. The near erratic policy changes following changes in leadership saw foreign investment shrinking vis a vis its neighbors. With many large infrastructural projects being placed on the back burner, Malaysia is clearly not thinking long-term. The recently announced budget clearly indicates a country that is struggling to make decisions. The supply bill – the largest ever allocation – suffers from a lack of strategic outlook.

Will there be clear winners in this election? All bets are off, at least for now. The ongoing and hugely confusing political flux is not giving favours to clear-cut predictions. But what seems apparent – judging from the moves made by various political parties – is that winning the election requires that parties court the Malay votes. UMNO and BN seem to have a slight edge judging from BN’s clear wins in the state elections in Johor and Sabah and the various by-elections. Ismail Sabri’s leadership – the surprise candidate for Prime Minister for the BN – has proven to provide some semblance of stability to Malaysian politics. Other parties like Bersatu, Amanah, MUDA, and even Anwar Ibrahim’s PKR are also trying hard to convince the Malay heartlands. Even the DAP – a party that traditionally relies on the Chinese vote bank – is now planning to field more Malay candidates.

Indeed much has changed in Malaysian politics since 2018. It is still early days to predict the outcome of this election. But a repeat of the Pakatan Harapan victory in 2018 seems out of grasp. PH has an uphill task convincing voters given the alliance’s sketchy performance after assuming office in 2018. The 22-month of PH rule was tumultuous, to say the least, with party infighting and the bitter power struggle between Anwar Ibrahim and Mahathir hogging the limelight that left the alliance little time for more serious policy changes. The infighting, the Sheraton Move in February 2020 which saw party stalwarts jumping ship to join other parties and the timing of the Sheraton move coming as it did during the early stages of the Covid-19 pandemic left a huge impact on the voting public.

What the country needs now is firm leadership. But leadership is in short supply. Younger leaders are not making headway, crowded out by older political masters. Actors who were so instrumental to PH’s historic victory in 2018 – Mahathir Mohamad, Azmin Ali, Muhyiddin Yassin, Lim Guan Eng, Lim Kit Siang, Syed Saddiq, Mat Sabu, Tony Pua – are now at loggerheads singing different political tunes. Even the ranks within UMNO and the BN are clearly grappling with leadership issues now that Najib Razak is serving time in prison that has put paid to the “Bossku” phenomenon. A new alliance, the Perikatan Nasional (PN) – helmed by PAS and Bersatu – does not have traction beyond PAS’ traditional vote banks in the North and Eastern states of Kedah, Kelantan, and Trengganu. Bersatu, with Muhyiddin Yassin heading it, could suffer huge losses given Muhyiddin’s handling of the pandemic when he was the Prime Minister. While 2018 saw well-oiled party machinery and coherent opposition, this election will see badly fractured political parties.

At the end of it, the political party that can provide a more coherent story of restoring growth, stability, and peace will take the reins of Putrajaya. As it stands, there is no clear-cut winner. We cannot discount the possibility that Malaysian politics could see another round of loosely held coalition. At a time when the country needs predictability, there is a good chance that this election will not guarantee one. For the sake of growth and stability, let’s hope this will not be so.