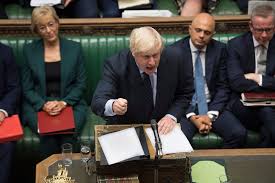 British members of parliament have denied Prime Minister Boris Johnson of the two-third majority that would allow his government to go ahead with an early general election.

This is the second time the British parliament has voted down the initiative, which if passed, would schedule the election on 15 October.

The result did not stop the government from suspending parliament as planned. The new parliamentary session, marked by the Queen’s speech, will now be on 15 October 2019, about two weeks before Britain is scheduled to leave the European Union on October 31.

Members of the opposition are crying foul over the Prime Minister’s decision to have the new parliamentary session, just days before Britain’s exit from the EU.

They are saying that having a new parliamentary session so close to the Brexit deadline would effectively block any attempt to renegotiate a new Brexit deal and prevent a no-deal Brexit.

Meanwhile, the Prime Minister says that he will make fresh negotiation with Brussel. He does not dismiss, however, that his government is going ahead with its plan to leave the EU, deal or no deal come October 31. For more of this read.