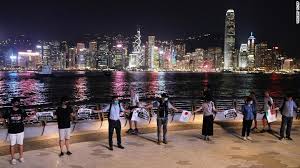 The protests in Hong Kong are showing no signs of letting up. This weekend, protesters are organising several street marches on major sites in the territory continuing their decry of what they called “the erosion of one country, two-systems model.” Meanwhile, Hong Kong authorities are mounting tighter security measures on all modes of public transport. This comes after protesters warned that they would conduct a “stress test” on all major public transport modes leading to the airport. Security has been doubly tightened at Hong Kong International Airport to prevent another massive sit-ins that had threatened to put all flights to a standstill .

China meanwhile is beginning to show signs that it will not hesitate to intervene should the 3 -month old protests impair Hong Kong’s security. As it stands, it has ample ways to do so. China’s influence over key appointments in the administration and the presence of China loyalists in the Hong Kong administration might produce enough resources to bring an end to the protest. It is highly unlikely however that China will deploy forceful intervention to bring an end to the protest. Doing so would be at China’s peril. Any forceful intervention would inevitably put on display China’s firepower that could severely tar the country’s long standing quiet diplomacy image and unnerve its immediate neighbours. China’s strong arm tactics would compromise its soft-diplomacy posture and complicate its many economic, social and political involvement with regional countries.

In his latest comment, US President Donald Trump is not showing any indication of a US involvement in the issue. In fact, he recently told his Chinese counterpart, president Xi JinPing that the US would play no part should China decide to intervene in the issue.. Trump’s latest reaction is no surprise. His reaction to the Hong Kong issue is consistent with his America First policy, one that sees the US wanting to play no active part in international domestic affairs.

While the 3-month long protests might wear down some, sustained acts of protest show that the majority are prepared for a long drawn battle with the authority. What is clear however is that the protesters might have to rely on their own resources when it comes to crafting terms that are amicable to all parties. With the US silent on the issue, Britain too busy with Brexit and China ever ready to bring normalcy to the streets of Hong Kong, the verdict of the 3-month long protest would now rest squarely on HongKongers. Let’s hope that there will be a peaceful end to this. For more of the protest and Trump’s stance on Hong Kong, read this interesting analysis by the Brookings Institute.